Automate your approval process in SuiteCRM

Often in business, you require multiple levels of approval from decision-makers for some records/requests. Approval processes are standardized within companies to dictate how the submitted work should be approved and rejected. It becomes tedious to filter the records and send them for approval manually. Also, these processes are slow, inefficient, and cause delays due to miscommunication or a huge pile of records to be processed. Most organizations are now starting to adopt approval processes, they still aren't actively automating these processes, which can lead to decreased productivity and accountability.

Approval processes are very important for an organization because it plays a powerful mechanism to control an internal process that to be completed as part of a business process. The Approval Process for SuiteCRM simplifies this task by automating the entire approval process. The approval process for SuiteCRM lets a user approve/reject the record which the admin has set by specifying the criteria based on which records will be sent for approval, setting multiple levels of approval, and assigning an approver for each level. You can also set the action(s) to perform on approval and rejection. 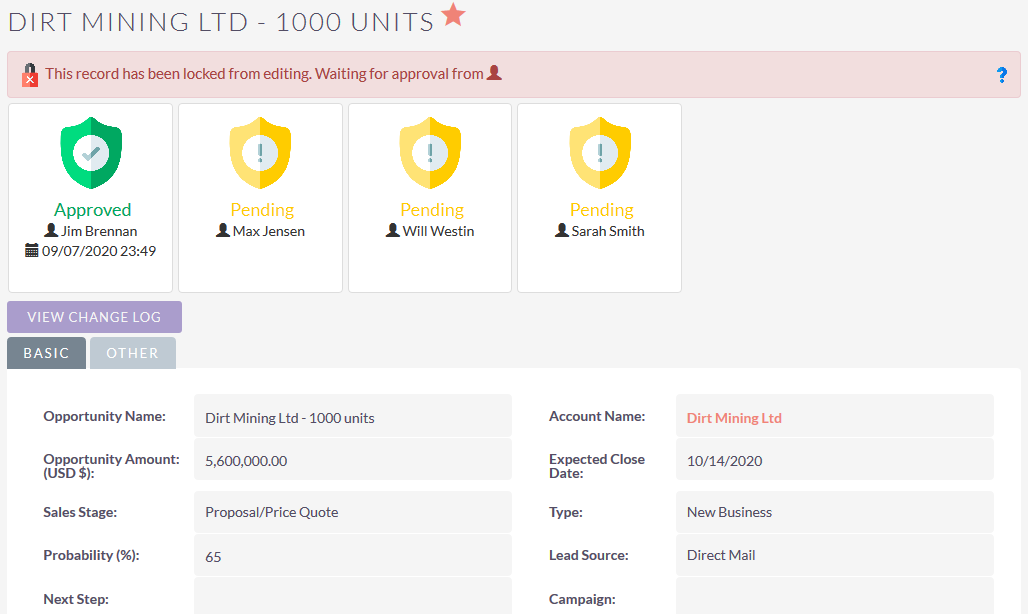 A typical setups of an approval process

An approval process automates how records are approved in SuiteCRM. An approval process specifies each step of approval, including from whom to request approval and what to do at each point of the process. The process can be setup for any module, along with multiple rules/conditions and the order in which the users should approve. The approval process can trigger on satisfying the rule criteria on Record creation as well as Record updation. 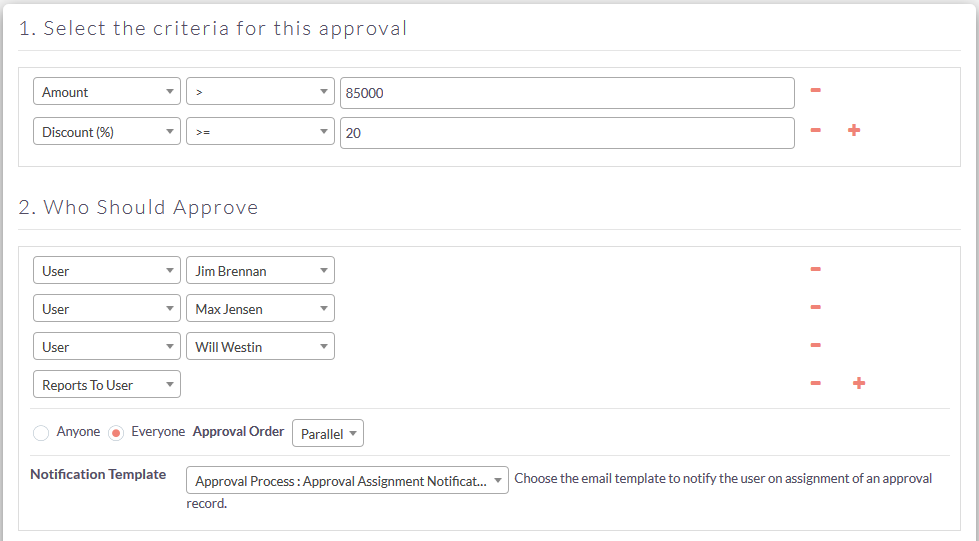 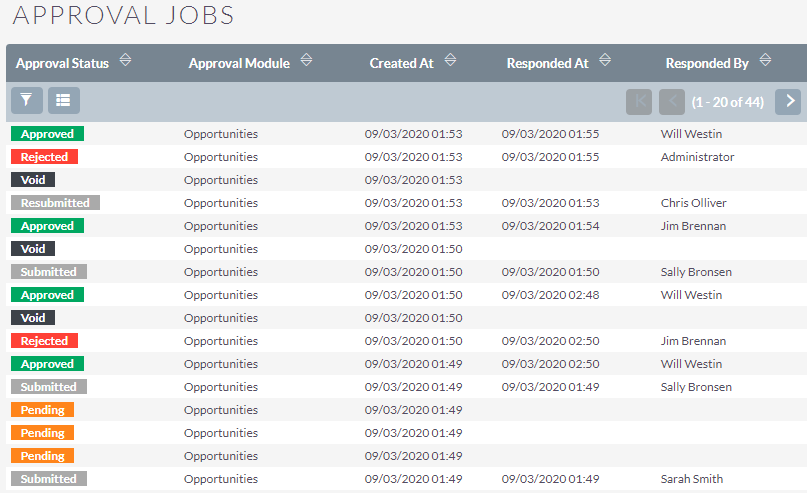 On the busy schedule of users with a pile of work to be addressed, Users won't miss any approval request by getting an approval email notification as well from the CRM's Approval Jobs Listview and the Dashboard. The approval request notifies the recipients that a record was submitted for them to approve. The list of records shows data with all the statuses from Pending, Submitted, Approved, Rejected etc. Users can filter the list to show all the approval jobs which are in pending state, which requires his attention.

Respond to the Locked record

When criteria matches for an approval process, the record will be locked from edit. Any further updation or edit either from SuiteCRM interface, script or API will be ignored. The process will send a notification to the approver. From the list view or dashboard, the user can identify the records that are seeking his approval. Users can directly jump to the detail view of the record to respond. 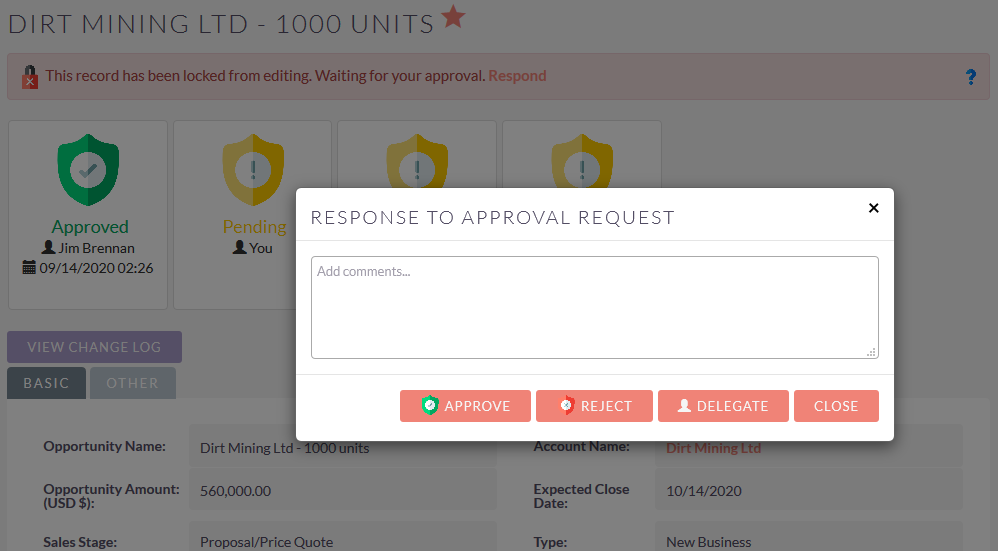 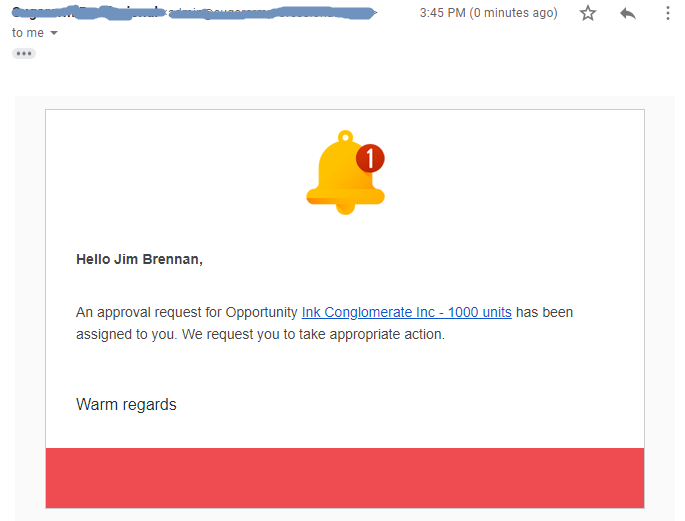 When a approval request is created and assigned to a approver, it automatically sends e-mail notification with all the necessary information with the link to the record in CRM. The Approval process during its life cycle from being approved or rejected travels many approvers one after other, which not only sends an assignment notification email but there are multiple options to set up an notification on Actions on Approval and Actions on Rejection. Some of them are Email to requester, Email to additonal recipients, Rejection email to (Requester, Requester's Manager, Everyone Approved) and Approval email.

Respond to the approval request

Users either can respond directly from a detail view of the record or from the Approval Job view. In detail view, Approver will have a button to respond as well as a list of other approvers of the same record. The user can respond to the record by the action of Approve, Reject, or Delegate it to other users with extra information in the description field which will popup when you click on any of the action. If any of the users reject the record all other remaining requests will be void. 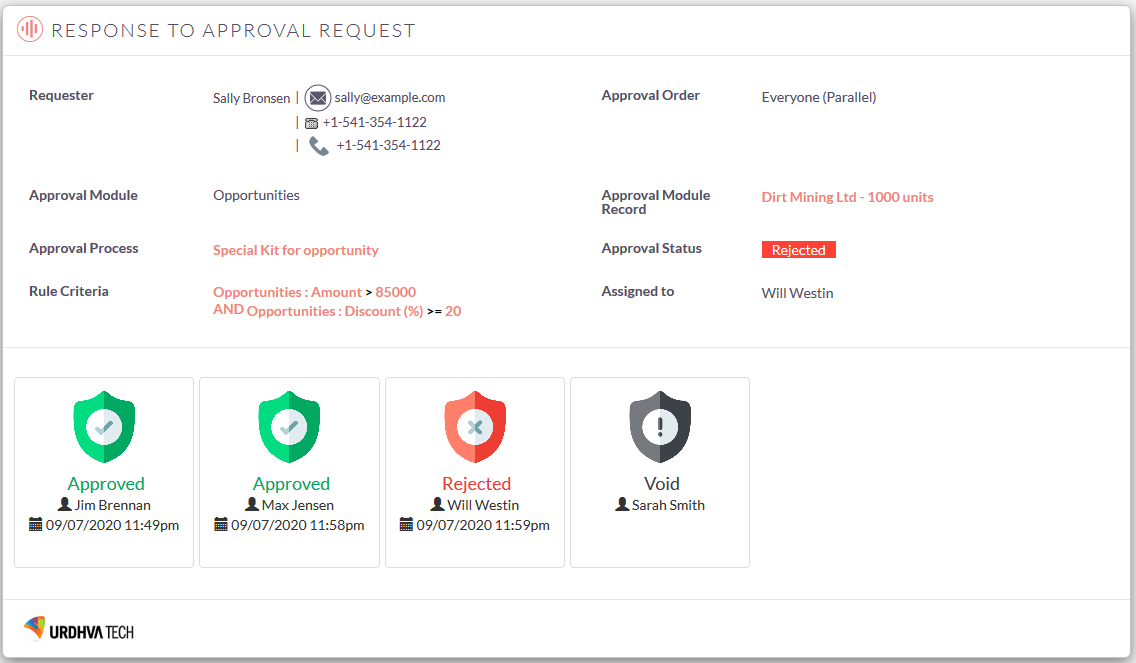 User guide
Get it from